When will my fingers stop hurting from playing guitar?

I just started playing. My fingers are killing me. Now what?

Almost every guitarist’s fingers hurt when they’re just getting started.

Most guitar strings are thin, hard pieces of metal, not unlike something you’d cut cheese with. And most fingers start out like cheese.

But, over time, like cheese (see, it’s coming back around) fingers naturally develop hard outer coatings to protect them. These are called calluses—this will happen on its own, and it will completely end the pain most beginners experience.

It’s all about the calluses

“I had a beginning student, this was his second lesson earlier this week. And he’s a very dedicated student, practicing an hour a day,” Brad Barnes says.

“He came in and he was like, ‘My fingers are killing me. What am I supposed to do?’ I showed him my calluses, and I said ‘It’s going to take you about two or three months, probably, to build this up. And you’re just going to have to tolerate the pain.’ It’s part of the process.” 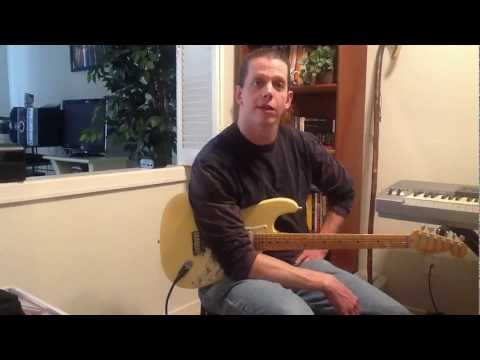 But there are things you can do to help make playing more comfortable, even before your calluses begin to develop.

Some of the pain many beginners feel in their fingers when they start learning to play guitar comes from something else: pushing down too hard on the strings. 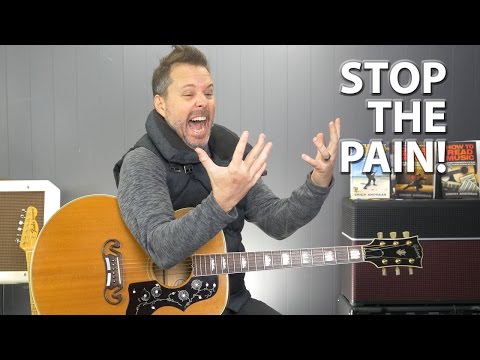 It’s a very normal reaction to most guitarists first experience in playing: they learn their first chord shapes, strum the strings, only to hear that dreadful buzzing. The solution: push down harder!

But pushing down too hard, especially before you’ve had a chance to build calluses, can make the pain in your fingers worse.

“Spend some time figuring out just how hard you actually need to press the notes on the guitar,” says Charl Coetzee of Guitar Skills. “Nine times out of ten, it’s a lot less pressure than you actually migh think.” 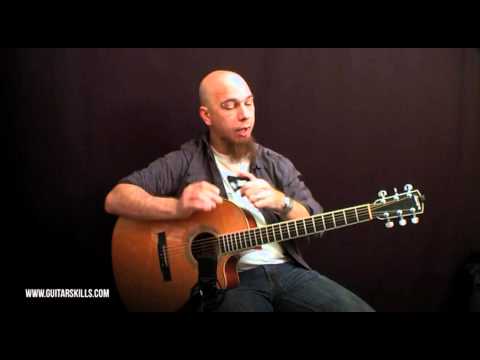 With practice, most guitarists find the right amount of pressure to both play cleanly, and comfortably.

“What’s going to happen is, you’re going to start pressing down just the right amount,” Andreas says. “The better the guitar player, the more they’ve played, the more years they have under their belt, the more they practice, the lighter they play.”

IT’S ALL IN THE STRINGS

There may also be some things you can do to make your guitar more finger-friendly, especially if you’re playing an acoustic.

(For more on which kind of guitar is best for beginners, see “Should beginners buy an acoustic or an electric guitar?”)

Because they have thicker strings, and thicker strings need to be tighter to produce the same notes, they can be more difficult to press down than electric or classical guitars.

“If it’s holding you back from practicing, do what you need to do to get easier strings on the guitar,” says Tomas Michaud. 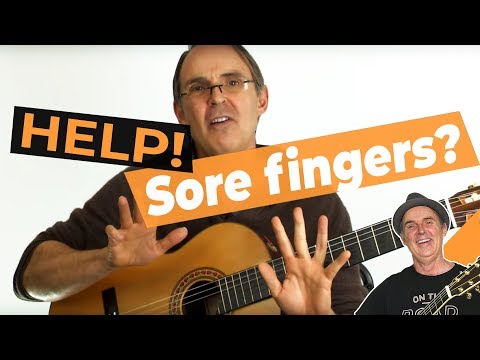 A good place to start: put the lightest strings you can find on your guitar. They’ll be easier to play.

“Another option is to put electric strings on,” Michaud says. “They don’t sound as good, but you can put thinner strings on that way, and, of course, you can always build up to thicker strings.”

One final piece of advice: avoid washing your hands or doing anything to soften them right before playing.

Strings are hard. Fingers are soft. Don’t make them softer.

Above all, experts say: take care of yourself, but don’t stop playing.

“One of the best things you can do to build calluses is simply to practice a lot,” Barnes says. “There’s no shortcut to that. But it’s important that everyone know that this is just something that everyone has to experience.”